A Brief History of the Chastity Belt 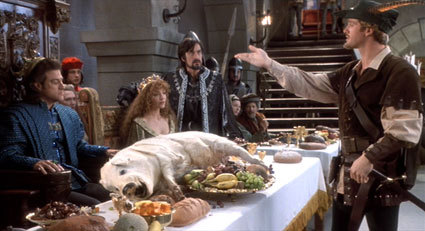 Whenever I hear the term “chastity belt” I always picture the movie “Robin Hood: Men in Tights.” In it, the leading lady, Maid Marian, dons a bulky iron chastity belt that looks like metal underwear, and she dreams of the day when her one true love can unlock it. Truly a love story for the ages.

As hokey as that sounds, I think that’s what most people picture when they think of chastity belts. I always imagined a medieval practice in which over-protective fathers and husbands locked up women against their will.  However, after doing a little research I learned that chastity belts weren’t used for this purpose at all.

(I know this seems like a random topic for this blog, but bear with me…I promise I have a point)

Throughout recent history, most of what has been believed about chastity belts is largely rooted in myth. Until recently, it was commonly believed that they dated back to medieval times. There were tales of Crusaders who forced their wives to wear these belts while they were away to ensure the women’s fidelity. All of these stories are myth.

In reality, the only references to chastity belts prior to the Renaissance were in poetry. The idea of a “chastity belt” was metaphorical, a symbol for a woman who was faithful and pure. A lot of the medieval chastity belts that you may have seen in pictures–they’re pretty horrific looking–are now believed to be fakes. Several museums across Europe pulled them from display because their dating was questionable, possibly having been forged in modern times. The iron work was so crude that no woman could have worn them for any length of time had they actually been used.

Ironically, chastity belts were not regularly implemented until the 19th century, and not under coercion of male family members. As women began to enter the work place, they frequently endured sexual harassment and assault. As a result, these working women wore chastity belts as a kind of protective measure.

This idea that women wore chastity belt’s to guard themselves, not because it was imposed upon them, has captivated my imagination for two reasons. One, I admire these women for taking such measures to guard their purity. While that pre-caution was physically necessary since they could literally have been raped in the workplace, they fought for their chastity nonetheless. Women today don’t typically face the same threat, but we don’t fight for our purity anymore either. Most of us hold onto it by a thread. For these women, purity was not imposed on them by culture or their church–the culture was threatening to rob them of it. So they fought back. I wish we could recapture this fighting spirit when it comes to our bodies. The type of danger has changed, but the attack on our purity remains.

The second thing I like about this story is that these women were likely married, but they still wore “chastity” belts. Chastity is a term that we typically associate with singles, but it’s really a virtue that all Christians should embody, regardless of marital status. While “chastity” can refer to virginity or celibacy, it also refers to the qualities of purity and virtuous character.

I can’t remember the last time I heard a preacher encourage married women to “stay pure.” For some reason that’s a topic that only single women get, but it’s an important pursuit for us all. Even as a young woman, I already have several friends whose marriages ended because the wives were unfaithful. These women weren’t bad people, but they let down their guard and Satan creeped in. It can happen to anyone, so whether you’re married or single you should fight for your chastity. Be modest, treat all men like your brother in Christ, guard your thought life against impurities, and only be intimate with someone to whom you are married. Purity doesn’t suddenly become easy once you’re married–the same Enemy who pursued you as a single person will continue to pursue you as a married person. That’s why Titus 2:4-5 instructs older women to train the younger women to love their husbands and children, to be self-controlled and pure.”

Chastity is a life-long pursuit. There will never come a time when you are safe from this temptation, so be watchful. Whether you are single or married, guard your purity like a treasure. Most of us are fortunate enough to live without the physical dangers that 19th century women faced, but the assault on our chastity is that much more subtle, thereby making it more culturally acceptable and all the more destructive.

The Brain on Lust

The Cultural Component of Modesty