Just how “Pro-life” are you? 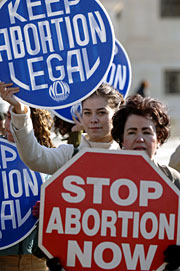 Over the past several decades, that is how the world has come to define us. And for good reason–the pro-life movement has been one of the definitive issues of evangelicalism. If you’re a conservative Christian, then you are a staunch believer in the pro-life movement, so much so that many Christians have become “one issue” voters–if your candidate is pro-life, then nothing else matters. Vote for them.

This is where we find ourselves today. You’re either pro-life or pro-choice. And in the ears of many evangelicals, that means you’re either a good Christian or a bad Christian.

However, I’m starting to wonder if the pro-lifers are really as devoted as they claim to be.

My doubt began to emerge in the last couple months after my fiancé and I decided to practice the natural family planning method of birth control. Considering numerous factors, such as the possibility that hormonal birth control methods like the pill can cause unintended abortions in early pregnancies, we prayed about it and felt this was the best path for us to take.

I’ll save that blog topic for another day, but what I want to highlight right now is the reactions we’ve received upon telling our Christian friends that we are practicing this method. It’s ranged from anything like, “What the heck is that?” to “Does that mean there are times each month when you won’t be able to have sex??” (horror of horrors)

But perhaps the one response that I’ve heard more than any other is,”What if you get pregnant??”

Initially, I found myself getting defensive about the method and entering into a kind of debate. I would explain how scientific it is, and how I know many people who have practiced the method without getting pregnant until they planned to, and how no method is fool-proof.

But one day, after hearing this reaction for the 100th time and entering into yet another debate about its effectiveness in preventing pregnancy, I stopped myself and asked, “Wait a second, is getting pregnant really all that bad?”

And therein lies the rub–the mindset behind that question, AND my response, seems to overlook two very important things:

1. Babies are good.
2. God created marriage to lead to families.

That said, it struck me as somewhat odd that Christians would be so scandalized by the idea that a married couple would get pregnant. Aside from the fact that we pro-lifers should be valuing life WHENEVER it comes, marriage is God’s ideal plan for raising children. Having babies within marriage is a good thing!

Now it IS important to be responsible and strive to provide for your child to the best of your ability, but we also have to trust that God will take care of us in the face of an unexpected pregnancy, and that’s not a language I hear amidst Christians circles very often.

If God created sex and marriage to result in children, then He’s going to be faithful to His plan. Getting pregnant before you own a home and have a solid salary isn’t going to throw God for a loop. He created marriage SO THAT the child will be provided for, which means the child isn’t going to undermine marriage’s created design. The child is PART OF marriage’s design.

But here’s the real problem: If we respond to the birth of children in a kind of worst-case-scenario manner, if having a child in the first year of marriage is such a scandal, we cannot sit back in shock and judgment when the rest of the world does the same. We are operating off of the same mindset, just in different ways. Maybe we don’t believe in abortion, but we are still placing different values on life, depending on when it comes.

That mindset is the heart of the pro-choice movement.

Again, I am not advocating that everyone has to practice the natural family planning method, nor do I believe we should churn out children like rabbits–there is a degree to which we should be discerning and prayerful about how many children we should have. BUT, that decision should be guided by a trust in God, not in a fear of limited financial resources, or even limited freedom.

That language should also serve as a framework for the way in which we talk about pregnancy.

Ike and I may get pregnant within our first of year of marriage. We may not. But whatever happens we will certainly consider our first child a gift from God, whenever he or she comes. And not simply because that child will belong to us, but because we are disciples of Christ, and that’s what it means to unconditionally affirm the goodness of that divine image bearer that God once named “Man.”