A few weeks ago I came across a blog post titled 10 Women Christian Men Should Not Marry. Some of the advice was sound. It advised against marrying women who are not followers of Christ, as well as women who love to gossip or slander. Those are wise warnings.

As for the rest of the list, I cannot agree with much of it–mostly because his “types” are only bad stereotypes, which isn’t very helpful. However, I was surprised and then a little bit tickled when I discovered this type of women at #3:

Under this category, the author explained that marrying an older woman is not a sin, but it’s also not “God’s ideal.” He goes on to reason that it “requires an extra measure of grace to lead a woman who’s older than you.”As his scriptural justification he cited Adam and Eve: “God intentionally (with good reason!) created Adam before Eve in the First Marriage.  Scripture informs us that God created man first chronologically for the sake of authority!”

The reason this made me laugh is that I am nearly 4 years older than my husband. Obviously, I do not agree with this man’s advice. However several years ago I wrote a post called Why I Married a Younger Man, so I wasn’t planning to respond further. 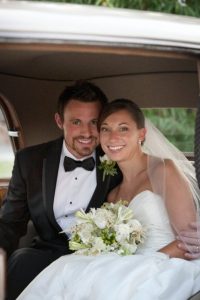 Then on Monday we celebrated my husband’s 30th birthday, which got me to thinking about him, the man he was when we married, and the man he is becoming.

My husband is and has always been one of the wisest people I know. At the age of 23 he was more mature than some 40 year olds. Some of his maturity comes from his particular life experience, but a lot of it comes from anchoring his identity in Christ. He isn’t the guy who has to “prove” how strong or smart or manly he is. Instead, his actions are typically motivated out of love for God and love for others, and he’s been that way as long as I’ve known him.

Now, that’s not to say that I haven’t watched him mature over the years. He is not the same man that he was when we met, and neither am I. Back then, he was 23 and I was 26. Now he’s 30 and I am 33. That age difference means less and less as the years go on.

Which gets to the problem with this blogger’s advice: it cannot be generalized. Some men mature faster than some women. Some men are very mature at a very young age. And some single women are at an age when a five year age difference means nothing.

My heart is especially tender for this latter category of singles, since I have a number of single friends in their 30’s and 40’s who long to be married but have fewer and fewer options available to them. I encourage many of these friends not to rule out younger men, and the older I get, the more of my single friends do end up marrying younger men.

Now, the blogger backed up his argument with Scripture, but here I have to be frank–that passage in Genesis has been used to legitimize just about every interpretation under the sun. We are never told that the creation order was a prescription for the birth order of spouses. We simply aren’t. This is a case of reading a particular interpretation into the text, and should be discarded as such.

I’m not saying age shouldn’t be a consideration. Age, personality, background, life goals, life priorities, and other personal qualities are all important considerations when thinking about marriage. Returning to “the list,” a conservative Christian man probably would not like being married to a a Christian feminist woman. But that does not mean ALL Christian men should avoid marrying Christian feminists, anymore than ALL men should avoid marrying older women.

The church is beautifully diverse, and every couple is different, which is why these lists are limited in their helpfulness. Too often they reflect more about the list-maker’s personal preferences than solid biblical counsel. You can spot this mistake when a list focuses on certain expressions of a virtue or vice, rather than the virtues or vices themselves. After all, what matters is not so much age, as maturity.

That’s why I hope all my single people will hold these lists with a very open hand. Instead, I hope you will do this work of discernment in community, with the direction of Scripture and the leading of the Holy Spirit. God created unique image bearers, not categories, which is why I am SO grateful for the community counsel and the Holy Spirit vision that allowed me to see my husband not as a “younger man,” but as the man of God that he is.

Otherwise, I would have missed out on a lot of the good that God had for me!