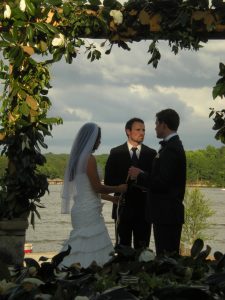 Today Her.meneutics published a post of mine about why Ike and I go to marriage counseling. In the post I referenced a recent wedding that Ike officiated (pictured left), in which he preached on wisdom. I really loved what Ike said that afternoon, so in conjunction with the Her.meneutics post I thought I would share more excerpts from his message.

What follows are some of his reflections on the importance of seeking counsel, and what it means that Jesus is our definitive example of wisdom for marriage. The opening excerpt picks up about half way through his charge to the bride and groom.

I would like to offer one piece of advice:

The book of Proverbs often contrasts the wise person with the fool, and I have always found the difference in this comparison to be extremely profound.  Proverbs tells us that fools think their own way is right, but it is the wise person who listens to counsel.

What the author is getting at is the very counter intuitive idea that what characterizes someone as wise or foolish is not how much wisdom one has, but the person’s disposition toward seeking wisdom and counsel.

Obviously the one who seeks wisdom will have more wisdom, but they only seek wisdom because they are open to it.

Sharon and I have been married for almost three years, and we have been meeting monthly with a counselor for almost two of them, not because we have major problems, but because we do not want major problems.  We know that, as Proverbs tells us, plans fail for lack of counsel, but with many advisers, they succeed. Today, you are stating that it is your plan to be together til death do you part.  I can tell you, with many advisers, you will succeed.

Wisdom is a concept found all over the Bible. Wisdom is mentioned in the Garden and in the Exodus. It is exemplified by Solomon and it is personified in Proverbs.  Kings plead for it and prophets demand it.  In the New Testament, Paul also speaks of it frequently, instructing the Ephesians to live not as unwise but as the wise, and comparing God’s wisdom to man’s in 1 Corinthians.  In 1 Corinthians Paul tells us that Jesus became the wisdom of God, and in the Gospel of John, he embodies it.  In John 1:1, Jesus is referred to as “the logos”: the word, reason or logic.  For the author of John, Jesus is the logic of God.

If you want to know how God thinks, look at Jesus. When we look at Jesus, we see a God who entered a covenant, much like the one you are entering today, and in that covenant dealt with a wandering and at times faithless people. But rather than writing them off or smiting them from the face of the earth, He entered the world as one of them Himself—a Jew from Galilee.  He bore what was to be theirs, so that they may be His.

When the covenant was broken, God did not cancel the covenant. Instead, He entered deeply into it in order to heal and repair it.  The marriage covenant, more so than any other covenant, is intended by God to be a witness to the nature of God’s covenant with us.  By our undying and eternal love and faithfulness for one another, your marriage will testify to the undying, eternal and unconditional love of God for us.