The Terrible Idol of the Entertaining

Well it’s Election Day, a day I have been anxiously awaiting. Yes, I am excited to find out who will be our President, but I am just as excited (perhaps even more excited) that today heralds the END of the election season! I am tired of nasty political ads and I am exhausted by the larger political atmosphere. I completely understand little Abigael’s frustration over the onslaught of coverage of Mitt Romney and “Bronco Bamma.”

As this contentious election comes to a close, I want to share a message from blogger Matthew Lee Anderson that is timely. Matthew blogs over at Mere Orthodoxy and if you haven’t read him before, you really should. He is one of the smartest Christian bloggers out there, and I am consistently challenged by his writing.

This week he reviewed the controversial new book by Rachel Held Evans, A Year of Biblical Womanhood. This book has been reviewed up and down the Christian blogosphere and has generated quite a lot of debate. You’ve gotta hand it to Rachel; she is quite the conversation starter!

Given the flood of book reviews out there I was hesitant to read yet another, but I really enjoyed Matthew’s review of the book. It is worth your time to read. Although it is long, it is especially worth reading to the end. As a kind of closing thought (or rather, a warning) he writes about the state of Christian blogging today, and it is a message I needed to hear. In a political climate as toxic and divided as the one we find ourselves in today, one that has undoubtedly permeated the church, his words are important.

Here is what he said:

I’m no Roman history expert, but I take it that it was their love of entertainment that led them to the Coliseum.  It’s a bloodthirsty idol, entertainment, for it knows no boundaries nor respects no persons.  Over the past two years, Christians have engaged in a variety of controversies—which they have been doing for a long time, but which seem to be coming and going with a greater rapidity while being discussed at a significantly more shallow level.  I think of Rob Bell’s book, Jesus>Religion, Mark Driscoll’s book, the Wilson dustup, and now this conflaguration.  And there are, I think, others I am forgetting.

In each, the form of arguments have rarely been commendable and the level of discourse ennobling.  We have increasingly, it seems to me, been taken by these controversies and fought for pageviews in the midst of them.  And that has meant mostly fighting each other, clashing verbal swords and letting the digital blood flow in the streets.  I know well that there is a time to disagree and to draw lines.  And I also know that when the controversy is upon us, the drumbeats of war always beat the loudest, and it is usually in such moments that we should speak of peace.  Perhaps we would all do well to wield our intellectual swords with a good deal more care.

Eight years ago, I thought that blogging held promise for the church to improve its dialogue and help minds think more Christianly.  I now wonder whether that is true, or whether the intrinsically shallow nature actually induces an entertainment-oriented mindset that prefers the action of a controversy to silence or to the boring, mundane work of saying the same old thing.  I see the tendency toward degrading speech in myself and have watched it come to the fore over the past year.  And I am not at all certain it should continue, either in me or in the rest of this small corner of the internet.   Because if evangelicalism continues to be a movement that lives on controversy, then it is certain that it will someday die by it.

Matthew, thank you for articulating this problem so vividly. I have often wondered about the fine line between honest and thoughtful engagement of a difficult issue, and throwing more kindling onto the latest delirious controversy. Your words shine light amidst a day like today when our Twitter and Facebook feeds are clogged with political screeds, many written in the name of Jesus. In a national climate like ours, I hope Christians will weigh your challenge carefully and consider what a different kind of witness might be. I hope that the entertainment value of controversy will not prove to be our undoing. 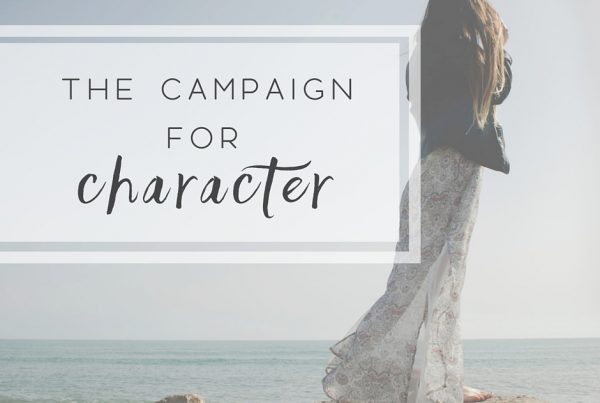 The Campaign for Character