Two nights ago Ike put our son to bed, walked into the living room, settled in on the couch, then turned to me and smiled.

“Do you know what Isaac just did? He hugged me, told me he loved me, and said ‘Goodnight.’ He’s never done that before.”

As he spoke, Ike’s voice began to quiver and his eyes welled up with tears. Being the sensitive wife that I am, my jaw hit the floor in shock. Ike is NOT a crier–I can count on one hand the number of times he’s cried since we’ve been married–so I was stunned. Somehow that little boy’s affection had moved my husband to tears.

Who would have guessed that it would take something so small, so ordinary, so every day?

Yet that’s what it’s like to be a parent. And I will never forget that moment, because the image of Ike sitting on the couch with wet eyes and a grin on his face–that’s what fatherhood should be. 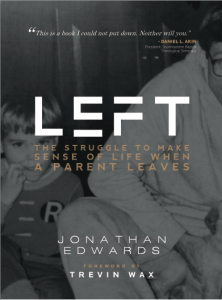 A few hours later I sat down to read an excerpt from a book written by an old friend. The title is Left: The Struggle to Make Sense of Life When a Parent Leaves. I’ve known the author, Jonathan Edwards, for over 10 years, and he has finally published the story of growing up without his father.

If you ever meet Jonathan, he is full of life. He’s the kind of guy whose energy sprays against the walls of every room he enters. He is not someone who seems weighed down by the wound of an absent dad.

But when I sat down and read the below words from his book, I encountered a different Jonathan. In fact, I felt like my heart had been ripped out of my chest. Earlier that evening I had witnessed firsthand the beauty of fatherhood. Upon reading Jonathan’s words, I was reminded that some experience a very different kind of fatherhood, one that leaves a terrible scar:

Because my father left my family.

And I will never forget it. I kept asking my mom where he was and why wasn’t he home. I wanted to know why he wasn’t eating dinner with us and why his car wasn’t in the driveway. It bothered me. It kept me up at night. I didn’t know how to process being home and living life without him there. I remember feeling so vulnerable and exposed. I remember being so uncomfortable. I had so many questions and so many concerns. It was here that I was reluctantly introduced to the empty space that would begin making its way through every aspect of my life. This vacancy, this void, was everywhere.

But his clothes weren’t there. Our laundry basket didn’t have any of his t-shirts or pants or socks. All the clothes in the basket were too small for him. We didn’t have any daddy clothes to wash.

The days and months unfolded with this ever-present, physical emptiness forced to be tolerated by a mind too young to comprehend anything inside this new way of life. I didn’t know what to say or how to act.

It was a whole new world to me and this new world I was in was much different from the one Aladdin and Jasmine sang about. Normal became foreign. Everything was strange. Everyday I woke up hoping it was all a dream, hoping that I’d run downstairs and there he’d be in his blue and white bathrobe with his brown leather slippers, drinking coffee and having breakfast doing his crossword. But once I woke up he was nowhere to be found and he left me nothing to help navigate and comprehend the hell I was in. He didn’t leave me any instructions or guide to help me weather this monster of a storm that he created. I felt broken. I felt lost. I felt abandoned. There was no warning, nothing on the news to tell me where to go, or how to hide, or how to stay safe.

The next day he wasn’t.

As I write this post, my son is sound asleep in the room next to me. His world is stable and secure. He trusts me and Ike so completely that he often jumps from dangerous heights simply assuming we will catch him. Our relationship with him is a source of courage and strength.

When I read Jonathan’s words, I thought of my son and his tender, trusting heart. It is in the soul of every child to look to his parents for security, an echo of the trust we were designed to have for God. It’s an enormous responsibility for parents, and sometimes, sadly, parents fail.

And because of that innate, innocent trust that a child bestows upon a parent, the betrayal runs deep.

That was Jonathan’s experience. And as terrible as it was, I am grateful Jonathan has shared his story in all its rawness. It is a story of pain but it is also a story of faith in Christ, and if you have been wounded by the abandonment of your parent–especially your father–I think his story will resonate.

So I encourage you to check out this book. My hope for you is the same as it is for Jonathan, who shared these words in a recent interview:

My hope and my prayer is that it shows [the readers] they aren’t alone. My prayer is that it will lead them to some form of healing. Whether they are holding on to anger or bitterness or apathy, I hope the book would allow them to let go of those things by grabbing a hold of the Savior.