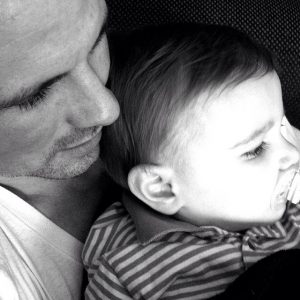 From the day Isaac was born, he looked just like his dad. I lost count of the people who said to me, in some variation, “You’re lucky you gave birth to him, because he’s ALL Ike!” Now that Isaac is getting older, people direct their comments to him instead of me: “You look JUST like your father!”

I really don’t mind these remarks, because I happen to think Ike is better looking than me. That was a genetic WIN as far as I’m concerned! But I also hope and pray the similarities run deeper. I hope the resemblance isn’t in appearance alone, but that my son inherits Ike’s character as well. I hope Isaac adopts the same kindness, godliness, patience, and wisdom he sees in his dad.

I hope, in that sense, he does look “just like his father.”

As a woman who closely resembles her mom, it strikes me that God wrote this pattern into creation. Children usually resemble one or both parents, sometimes startlingly so. As children, we take on our parents’ personalities as well–for good and for bad. In fact, the older I get and the better I understand myself, the more I realize just how much I look like my parents.

One of the things I love about this genetic echo effect is that it also echoes our relationship with God. Genesis 1:27 tells us that God created us in his image, which can mean any number of things. For one, our bodies, our hearts, and our souls all reflect the divine, and should be treated with corresponding dignity. The verse also suggests that we as a people reflect the communal image of God, the Trinity.

However Genesis 1:27, when read alongside the pattern of creation, is also about parentage. Our image should reflect where we came from, and who we belong to. When people look at us, they should see some passing resemblance of our Father. The picture isn’t exact, just as no child is an exact replica of her parent, but there should be a likeness. When people look at me, they should think to themselves, “She looks just like her Father.”

This pattern of creation is underscored by the oddity of a child who does not resemble his parents. When a child doesn’t look like his parents, people notice. They make milkman jokes. They wonder where the child’s traits came from. My brother, for example, is over 6 feet tall though my parents are relatively petite. In our family photos, he towers above the rest of us, and we can’t figure out where his height came from.

When a child doesn’t resemble their parents, it’s surprising. Even dissonant.

I think it’s the same in Christ. When we claim to be children of God, but we don’t resemble him, people take notice. They wonder how we could be His kids when we look so different. Or even worse, they wonder if the pride, bitterness, hate, and greed are, in truth, a reflection of our Father. Maybe, at the end of the day, God is like that.

(As a side note, this analogy clearly has its limits, since Scripture also uses the language of adoption to capture our relationship with God. Sometimes, a child who looks different from her parents is a beautiful analogy for the gospel!)

All of that to say, the image of God isn’t just about human dignity. It’s also about witness. The way you live your life, the way you parent, the way you work, the things you post on Facebook, all of it–people should look at you and marvel, “Wow, she looks just like her Father!”

It’s a simple idea, but it’s the one that has captured my imagination today, as I rock my youngest son to sleep–the one who, apparently, looks a lot like me.