A Woman Without Discretion

This week I start a new class and my life is about to get super hectic, so I thought I would re-post a blog I wrote a couple years ago (before I was married, as you will notice) that is admittedly one of my favorites. Let me know what you think!

Every Fall, the North Carolina State Fair comes to Raleigh, North Carolina for about a week and a half, and every year I go to the Fair to do the following:

1. Look at all the mullets

While the first two are fairly self-explanatory, let me explain the last one.

At the State Fair there is a giant compound that houses all the award-winning livestock for that year. As a part of the Fair, attendees can go inside to look at the cows, goats, sheep, etc. but you cannot touch them. Ordinarily, this rule would not be a problem for me, except that one of those pens contains an entire litter of baby pigs. And they are by far the CUTEST thing you’ve ever seen.

Unfortunately, you can’t get anywhere near enough to touch them. You just have to stare at them from afar, only wishing you could crawl in there and hold them. I seriously wanted to kidnap one of those adorable baby pigs. I was so smitten with them that I literally talked about it all year long.

Lucky for me, I am getting married to a man whose father used to be in charge of the State Fair livestock, so he has “connections.” (And no, that is not why I’m marrying him) Early on in our relationship I explained to him my life-long desire to pet and hold a baby pig, maybe even adopt one as a pet, and he told me he could work something out.

When the State Fair rolled around the following year, Ike called in a favor, and one night after the Fair closed we got to go inside the pig pen. Finally, after years of waiting, pining, I got to hold a baby pig. 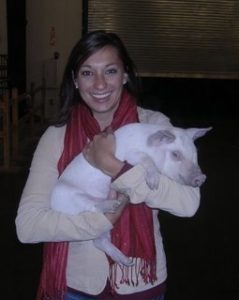 Tragically, it was not the experience I thought it would be. Looking at a baby pig, you’d think they’d be soft and squishy and cuddly–kind of like a pink puppy. But they’re not. Their hair is coarse, their skin is rough, and the pig I held screamed the entire time like I was murdering it. I felt like one of those mortified mothers whose kid has a meltdown in the grocery store.

After that experience I was pretty disillusioned with the baby pigs. It was a major let down after years of build up.

Now even though my long journey ended in disappointment, I share this story because it actually helped me to better understand a passage of Scripture that I’d always been familiar with. Proverbs 11:22 reads–

Like a gold ring in a pig’s snout is a beautiful woman without discretion.

As a result of my experience at the State Fair, I have learned one very important thing–no matter how old they are, pigs are nasty. The babies may look cute if you’re standing far away, but if you get close enough to touch them, you’ll see that they’re just mini versions of their mothers–mean, moody, and dirty. They also get obscenely large.

So while a gold ring might be a stunning piece of jewelry, its beauty is lost when placed in the snout of a pig. No matter how exquisite, there is no ring that can over-compensate for the hulking mass behind it. It’s just a tiny, shiny ring on a giant, dirty pig.

This is the visual we are meant to imagine when we read Proverbs 11:22. The beauty of the ring is completely overshadowed by the pig that dons it, and it is the same in a beautiful woman without discretion.

If you look up the definition of “discretion,” you will find the following synonyms: discernment, maturity, wisdom, thoughtfulness, prudence, and care. These all describe the kind of character that honors God, and honors those around her.

With that in mind, a woman could be a Sports Illustrated swimsuit model, but if she’s got a sailor’s mouth, she manipulates people with her body , and she throws a fit when she doesn’t get her way, then her beauty immediately pales. Her looks cannot make up for her personality.

Now given the way our culture emphasizes beauty, this may seem hard to believe. After all, beautiful women are allowed to get away with a lot more bad behavior than their “less attractive” counterparts. Is this verse really true?

The answer is an emphatic “yes!” A woman’s beauty might open some doors for her, but it is her character that will be her ultimate success. Beauty may attract a man, but faithfulness and respect is what will enable her dating relationships, and ultimately marriage, to last. Beauty may get her a job opportunity, but her work ethic will allow her to keep it, if not excel. Beauty may give her attention and friends, but it is her trustworthiness that will determine whether they stick around.

When a woman looks back on her life and measures the successes of her beauty, versus the successes of her character, she will find that her character made all the difference. It determines whether or not those blessings will be lasting. And when measured this way, it becomes more clear that the beauty of a woman without discretion does little more for her life than a ring on the tip of a pig’s nose. Both adornments are ultimately fruitless.