An Ode to Good Men 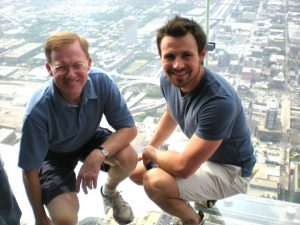 Today is the FIRST Father’s Day that my husband gets to celebrate as a dad, so I couldn’t miss the opportunity to hop on here and write a few things to celebrate him. I don’t want to embarrass him too badly since I have written a number of pieces bragging on him lately, but let’s face it–he deserves it!

To take the edge off, though, I thought I would use today to reflect on the TWO men who have meant the most in my life: Ike, and my dad.

Men in our culture often assume the position of whipping boy as society bemoans the fragile state of our nation’s families. Men get the blame for a lot of social ills in our day, and that is one side of the story, to be sure. However there is another kind of man out there that gets a lot less press, and I would like to tell his story today. It is a story intimately linked with my own.

My husband and my dad are two men who have had a profound effect on my life in the best of all possible ways. They are the two men who have supported me in EVERYTHING that I do, and they are also the two men who are first to advocate for me. They believe in my gifts and they think I can do anything I set my mind to. They tell me this regularly. They also tell me how proud they are of me on a constant basis.

As a woman, I cannot overstate the importance of having men in my life who affirm me the way Ike and my dad do. Knowing that their words are a reflection of God’s heart for me, I have a wonderful courage and confidence that is most certainly rooted in their love. At a time when research consistently reports the negative consequences of absent fathers and husbands, my life attests to the opposite effect. I am evidence of the strength and stability that is produced by having solid men in my life. Their character has very tangible benefits for me.

What is additionally amazing about Ike and my dad is the way that God brought them together, and uses them to build up one another. Both men lost their fathers at about the same age in life, for exactly the same reason. Both men watched their fathers struggle with inner demons, demons they were never able to overcome and eventually succumbed to entirely. Although I am certain that both of their fathers loved them dearly, they left Ike and my dad with a great void in their lives.

Given their mutual histories, both Ike and my dad could have become statistics. They could have followed the path of many young men whose family backgrounds led them astray. But neither did. Instead, they resolved to be different and to forge a new path. And today, they help one another in that endeavor.

It is amazing to me that I married a man with such a similar family history to my own father. But God’s goodness is so evident in orchestrating the intersection of their paths! As Ike becomes a father and figures out how to model his own father’s strengths while avoiding his weaknesses, my dad is there to guide him, not simply as a father-in-law but as one who knows EXACTLY what Ike is going through.

So today, Father’s Day, I want to celebrate my husband and my dad, and the many men like them. Men in our culture get a lot of flak for being slackers or refusing to grow up. There are indeed many delinquent fathers and “adultolescents” out there who earn the bad reputation. But there are also many men of honor and integrity who are quietly living lives of faithfulness and courage. They may not receive as much attention, but the fruits of their character can be seen in the flourishing lives of the people they love. I am one of those grateful beneficiaries.

So happy Father’s Day to Ike, my dad, and all you other men out there who have truly made a difference in the lives of those around you. You may never really know just how important you are.