Fear, You Will Not Have the Last Word 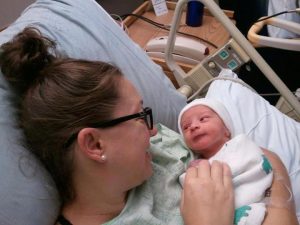 The day that my son was born, my heart followed him. That is to say, my heart left the relative safety of my body and became vulnerable to the world. Ever since that day, my joys have been brighter and my fears have been greater, all owing to my heart’s newly exposed state.

I think this experience is a common one for parents. In fact, while I was writing this post I heard President Obama articulate the same sentiment in his address at the Newtown Vigil. Our children are an extension of ourselves out in the world. And like the President–and every other parent out there–weeks like this one remind us just how vulnerable our hearts, and our children, are.

When I first heard the news of the Newtown shootings, I was at the gym watching a tiny tv screen attached to my treadmill. No one else around me seemed aware of what had happened, but I was barely holding it together. I didn’t want to burst into tears in the middle of the gym, but it was difficult not to. I kept imagining myself in those Connecticut parents’ shoes, and I felt like I might be sick.

Like many of you, that morning launched me into a place somewhere between shock and grief. All the delights of the Christmas season–the music, the decorations, the parties– took on a dark hue as a terrible weight settled over my spirit. On Sunday morning I sobbed through the entire worship service.

Before the events of Friday, I was already grappling with a lot of fear. On the day I found out I was pregnant, a tiny seed of fear was planted into my heart, one that seems to have grown with time. It is a constant battle to keep that seed from taking root in my heart and bearing fruit in my life. And weeks like this one don’t help. If anything, weeks like this one whisper to my soul, “See, you should be afraid.”

However Advent reminds me that I am not the first mother to face this fear for my child. Jesus’ birth was surrounded by tremendous violence. In Matthew 2 we read about the slaughter of the innocents, when Herod ordered the murder of all the boys in Bethlehem who were under the age of two. I cannot imagine the groaning and the gnashing of teeth that accompanied such a horrific act. Nor can I fathom the evil that inspired it.

Events like the Newtown shooting give us a glimpse into the pain of that massacre, and insight into Mary’s own concerns. The world into which we birth our children is the same world into which Mary birthed hers–a world of pain, suffering, and death. And in the face of such a world, it would be easy to let fear dictate our parenting. 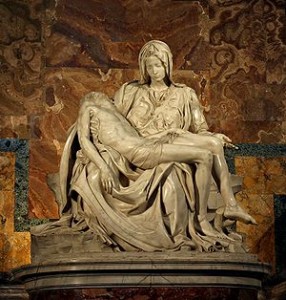 Mary knew that God had placed her son on earth for a specific purpose, and she knew that purpose would be accomplished whether she supported it or not. She therefore had a choice to make: Choose fear and retreat from God’s work, or choose courage and participate in God’s good plans.

It seems she chose the latter. Although I’m sure there were days when the cost of Jesus’ call struck terror in Mary’s heart, she did not allow that fear to take root. She did not let fear have the last word. She knew that God was good, and in the spirit of 1 John 4:18 she allowed God’s perfect love to cast out her fear. We know this because she was one of the only individuals present during Jesus’ execution. The rest of Jesus’ followers had abandoned him in fear.

Again, I don’t doubt that Mary was afraid the day of Jesus’ death, and many others. She must have experienced unspeakable horror and anguish as she witnessed her son being nailed to the cross. But fear did not ultimately determine the way she lived, nor did it shape her relationship with her son.

Mary’s example is therefore a powerful one during a week like this. She reminds us that it’s ok to be afraid, but we cannot let that fear take hold. Fear cannot have the last word. And we cannot let fear eclipse the reality that God loves us, He loves our children, and He is always good. Even in the face of our worst nightmares, those truths still hold fast.

On a day like today when my heart remains heavy with mourning, I will grieve. But, I will also fight the fear that accompanies these events. I will do this because “God gave us a spirit not of fear but of power and love.” (2 Timothy 1:7) I will do this because Christ died so that fear will never have the last word.