Gentleness: For the Wise, Not the Weak 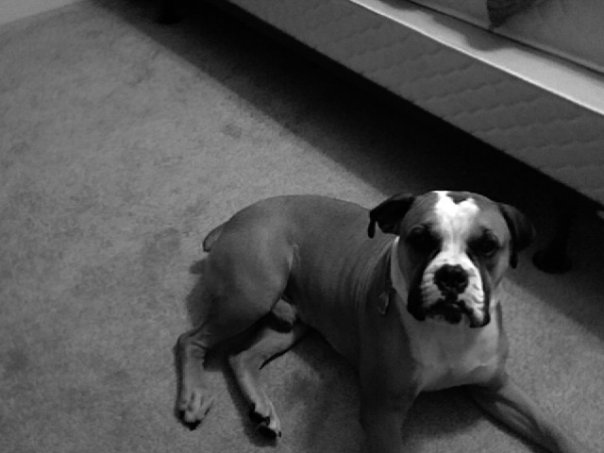 I want to begin today’s post with a story of unrequited love. It’s the tale of Ellie the chihuahua and Bo the boxer/English bulldog. Bo is pictured to the left. He’s my mother-in-law’s dog and he weighs roughly 60 to 70 pounds. He’s also one giant muscle. Ellie, my dog, weighs about 10 pounds. You can probably see where this is going.

Every time I bring Ellie to see Bo, he is beside himself with excitement. He loves Ellie. He starts out with the usual dog handshake–the butt sniff–which she seems relatively ok with. But then he starts falling all over himself with enthusiasm. He gets in her face, he wants to play, he wants to be as close to her as possible. And to this, Ellie’s response has always been the same: rejection. She bares her death and growls. I like to say she’s guarding her virginity, but in all honesty she’s probably just terrified of being eaten.

You see Bo doesn’t understand how to love Ellie the right way. He comes on so strong that she perceives his love as an attack. My husband has tried to coach him on how to be smooth with the ladies, but Bo just won’t listen. He’s too aggressive, which is why their love will never be. Bo doesn’t know how to be gentle.

Now the reason I share this story is two-fold. First, we tend to think of gentleness as a primarily female attribute, but it’s not. Not only is it listed in Galatians 5:23 as a fruit of the Spirit for all believers, but the story of Bo and Ellie also demonstrates how crucial it is for men to be gentle. How many of you know a guy who came on so strong that he was either way too aggressive, or just creepy? And more importantly, husbands must learn to be gentle if they’re going to love their wives well. For al my guy readers out there, your wife isn’t like your buddies. You can’t yell at her or fight with her and then go shoot hoops with her. You have to be gentle. Otherwise, you’ll always struggle to love your wife, and your children, effectively.

So gentleness is not just for women. But here’s the main reason I shared the story of Bo and Ellie: Gentleness is the way we translate love into a language the world can understand.

In the same way that Ellie perceived Bo’s love as an attack, the world often feels the same way about Christians. We show love so aggressively, namely by sharing the Gospel in harsh ways, that the world feels assaulted, not loved.

That’s why gentleness is such a crucial fruit of the spirit. Without it, we could make love look like whatever we want. We could be absolute jerks and call it “tough love.” Christians do that all the time. But God heads us off at the pass and says, “Now wait, I want you to be loving, but I also want you to be gentle.” Gentleness serves as a qualifier that prevents us from abusing love. It ensures that we’re conveying love in a way that the world can receive it.

So while gentleness is the oft-forgotten fruit of the Spirit that we tend to value little, I encourage you to consider how effectively you show it. Also ask you friends. When you’ve tried to convey a tough truth to them, did you do it gently? When you disagreed with your roommate or husband, did you relate your anger or your convictions gently? If you’ve ever had trouble effectively communicating your feelings to people, this could be the reason why. But more importantly your witness is at stake. If we feel the need to force the Gospel on people, they’ll probably respond the way Ellie does to Bo. We need gentleness to translate our love into a language the world can understand.