Stop Asking Jesus Into Your Heart 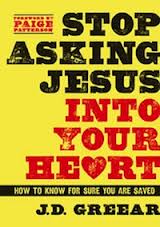 If you were to ask me when I became a Christian, I’m not sure that I could tell you. I have a vague memory of hearing the gospel and believing it when I was about 6 years old, but it wasn’t exactly an altar call experience.

That memory aside, I can’t remember a time when I did not identify as Christian. I was raised in the faith. The gospel was woven into the fabric of my childhood, my family, and my life. I believed in God, loved and followed Jesus, and thought that made me a Christian.

It wasn’t until later that I found out my lack of a definitive conversion experience was a “problem.” In high school and college I encountered a different narrative of conversion, one that was dramatic, distinct, and scripted. It involved a specific date, a clear moment of crossing over from death to life. There was usually crying.

Like a lot of young people I know, this language produced in me enormous doubt about whether I was really saved. Throughout college I would find myself praying the Sinner’s Prayer again and again, just to be sure I was saved. Every time I had a powerful spiritual experience (or should I say a powerful emotional experience at a church or retreat), I reaffirmed my faith in Christ. Just to be sure.

Eventually I grew out of this phase and came to rest in the assurance of my faith in Christ, but my story is not unique. Many Christians wrestle with the same doubt and, consequently, many pray the Sinner’s Prayer over and over again. Wracked with anxiety over the status of their souls, some Christians never truly find peace in Christ.

Last year pastor David Platt criticized this approach to conversion, referring to the Sinner’s Prayer as a “superstitious prayer.” You can read my response here, but the short version is this: Platt is right. A dysfunctional understanding of conversion has permeated evangelical churches throughout our country, and the consequences are many.

Fortunately, my friend and former pastor, J.D. Greear, has written a book that speaks directly into this problem. Titled Stop Asking Jesus Into Your Heart, this book not only fleshes out questions of assurance–namely, how do you know if you’re saved–but examines why the Sinner’s Prayer formula is problematic.

In particular, J.D. identifies the two ways this approach to conversion has led people astray. For some, it produces constant anxiety and insecurity. This first category of people constantly wonder if they “really meant it” when they accepted Christ. These serial converters perpetually doubt the sincerity of their last conversion, and wind up praying for salvation again….and again and again and again.

The opposite pitfall of the Sinner’s Prayer formula is a false sense of assurance. Many individuals pray the prayer so that they can check “Going to Heaven” off their list. However their life never produces fruit, and they never really know Christ. They recite the Sinner’s Prayer like an incantation that guarantees their salvation, and then move on with their lives.

Throughout his book, J.D. works through these two mistaken views of conversion, as well as the many other misunderstandings that accompany evangelical conversions today. Along the way, he argues for a more holistic approach to understanding salvation, one that is more about a “posture” than a moment in the past.

This book is a great resource for anyone wrestling with their own assurance of salvation. The book is short and it’s a quick read, so it’s extremely accessible to anyone in need of answers. The first chapter is especially strong, but I also liked his chapter on repentance. In it he works through a lot of false notions of repentance that are common among Christians.

Perhaps J.D. did not want to get mired down by the order of salvation, over which there is much debate. This book is not a theological tome, after all, but instead a simple resource for the average lay person. That said, this book is a much needed response to a long festering problem within the evangelical tradition. I hope that Christians struggling with questions of assurance will turn to this book for answers, but I also hope this book launches a much larger movement toward a holistic understanding of conversion. It is needed.