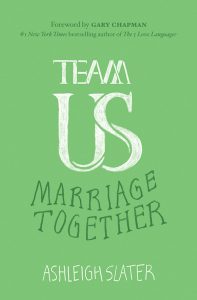 Well it’s Week 2 of my Summer Book Giveaway! Congrats to Kim and Michelle, who won free copies of Marlena Graves’ A Beautiful Disaster! This week I am so excited to give away one copy of Ashleigh Slater’s new book Team Us: Marriage Together.

I have to tell you, one of the reasons Ashleigh will always hold a special place in my heart is that she was one of the first people to take a chance on my writing. She founded the website Ungrind, where you can find lots of awesome encouragement for women, and that was one of the first places where I was a regular contributor. Ashleigh is also a wife and mother of 4 gorgeous girls, so she knows of what she writes!

I asked Ashleigh a few questions about her new book and why she cares about this message so much:

1. As I’m sure you know, there are a LOT of marriage books for Christians. With all the resources out there, what compelled you to write Team Us, and how is it different from other books on marriage?

When it comes to my writing, I actively hold to “write what you know.” So when Moody approached me last spring about possibly writing a book on relationships, I sat back and thought, “Okay, what can I write about that I have experience in and am passionate about?” The first thing that came to mind as I reflected on Ted and my marriage was how grace has impacted our relationship. This idea of writing on grace turned into the book that is now Team Us.

I personally think there are two things that differentiate Team Us from other marriage books. One, while I have been married for nearly twelve years, I’m not an expert on marriage, and I don’t present myself as one. Rather, as one reviewer wrote about the book – and I loved – I’m “still deep in the trenches of a fairly young marriage, raising small children, and navigating this crazy thing called commitment.” And that’s the vantage point I write from – as someone who’s right there with you, or maybe a step ahead or behind – going through the ups and downs of marriage. Two, it’s story-driven and conversational to the point that most people who’ve read it comment that it’s like sitting down and talking over coffee. That’s something I really wanted with this book. I didn’t want readers to feel like I was talking at them, but with them.

2. The image of marriage as a “team” is a central theme in your book. Why is it important for married couples to think of themselves as a team?

Whether it’s in sports or the office or even a show like The Amazing Race, members of a winning team are for each other. They work together in order to succeed.  And I believe that’s vital to marriage. One of the reasons Ted and I got married was because we believed God could use the joining of our lives in a unique way for His glory; that we’d be better together. That’s more likely to be our reality if we are united, determined to do what it takes to face life and its challenges side-by-side, rather than back-to-back.

3. What are some of the qualities of a good team?

I’m not much of a sports enthusiast, but in the book I do compare marriage to a sport I find intriguing: curling. As I compared marriage to curling, three things stood out to me.

One, strategy. Curling is nicknamed “chess on ice.” It may seem like this odd game with brooms, but there’s a ton of strategy involved and it’s fascinating. Marriage also benefits from strategy. A good team creates a game plan for what they want to accomplish. How they hope their relationship develops and where they want it to end up.

Two, intentionality. In curling, the members of the team have to be intentional in order to get the stone into the house. In marriage, it takes being intentional to move in the direction of those strategic goals of how you want your relationship to play out. Intentional couples make today’s decisions with a long-term perspective.

Three – and perhaps most importantly – grace. In curling there are players called sweepers. With those brooms, they help direct the stone into the house after it’s been slid. Strategy and intentionality are the “meat” and “potatoes,” grace is like the “secret sauce.” While strategy and intentionality set a marriage off in the right direction, it’s grace that sweeps it toward that heavenward path. It’s what brings you through the hard seasons united.

4. Who do you hope will read this book? Is it only for married couples?

I specifically wrote it for married couples in their first ten years of marriage, as well as for engaged couples. But as I’m getting feedback on Team Us, I’m discovering that it’s also resonating with individuals who are in dating relationships, as well as couples who’ve been married for decades. And while I didn’t write the book with marriages in crisis in mind, I’m friends with a couple who have been considering separation and even possibly divorce. They decided to go through my book and said it’s sparking good, much-needed discussion. So my hope is that no matter what stage of relationship a reader might be in – from dating to married for years – that the book will encourage them and their loved one to grow together.

This week I am giving away one free copy of Team Us! To enter for a chance to win, share a comment about your own experience of marriage as teamwork: Is this an image that resonates with you? How has teamwork served your marriage? What has threatened your unity as a team? Or what have you done to strengthen your teamwork?

Can’t wait to hear from you!