The name “Isaac” has a lot of significance in my family.  For generations, men in the Miller family have been named Isaac. It was the name of my husband’s great-grandfather, and the middle name of his grandfather and father. My husband goes by Ike, but his given name is Isaac, so when our first son was born we continued the tradition by naming him Isaac too.

Of course, the name Isaac dates back much farther than the Miller family. The original Isaac was given his name as a kind of legacy. The name means “he laughs,” a reference to his mother Sarah, who “laughed” when God foretold her pregnancy. Chuckling to herself she wondered, “How could a worn-out woman like me enjoy such pleasure, especially when my master—my husband—is also so old?” (Gen. 18:12, NLT).

Overhearing her deep heart doubts, God encouraged Sarah, “Is anything too hard for the Lord?” A year later she gave birth to Isaac, a child born of laughter and God’s gracious will.

Isaac is Sarah’s legacy in a number of ways. Isaac points back to Sarah’s laughter, and her doubt. However his life also testifies to the power of a God who uses women “past their prime.” In a culture and time when women were valued by their ability to bear children, Sarah had little worth. She was old and worn-out. She probably assumed she was near the end of her story.

I thought of Sarah this week because my grandmother is about to celebrate her 90th birthday. Ninety years is an accomplishment in and of itself, but what is especially remarkable about my grandmother is what she did in those 90 years. In addition to raising four daughters, she also taught piano, launched a ministry, earned her Doctorate of Music, and her Master of Divinity. Now in her late 80’s, she continues to teach piano.

I love the legacy of my grandmother because it challenges our notions of calling. It’s easy to think that you must accomplish something by a certain age, or else you’ve missed the boat. And I’m not just talking about the elderly. How many young moms feel “worn out” all the time? Your life circumstances are so overwhelming, your time so strapped, that going to school, or starting a ministry, or launching a business, all seem beyond your grasp. It can feel like you’re just too late.

But then I think of my grandmother. What if she hadn’t begun teaching piano until her 40’s? She still would have had 50 years left. She didn’t found her ministry until her late 50’s, which left her 30 years of service. Even her M.Div., which she earned in her “senior years”, was 20 years ago. Think of all she would have missed, had she laughed off God’s plans because of her age and life circumstances?

And what if she hadn’t lived this long? What then? Would her late-in-life accomplishments been worth it? Yes, but for a different reason. Last year when I interviewed seminary students for my doctoral research, I discovered a surprising influence on women with a call to ministry: their grandmothers. None of the women mentioned their grandfathers, and only a few mentioned their fathers, but most of them described their mothers and grandmothers as having been a significant influence. Many of the participants had strong mothers and grandmothers who modeled faith and strength, thereby empowering their daughters to do the same.

That’s my story too. I was in high school when my grandmother was getting her M.Div., so that was my normal. I didn’t think anything of women getting advanced degrees because I had seen my grandmother do it, and my mom had her Masters degree as well. As a result, I pursued my education without a second thought. It’s what women in my family did.

So even if my grandmother had not lived to use her M.Div. degree for 20 years, her legacy would have continued on through me. She was a trailblazer, and I followed her on that trail. 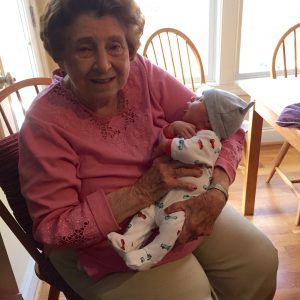 Wherever you are in life, only God knows the number of your days, and what your legacy will be. Perhaps you’ll have a 50 year stretch in ministry, or perhaps you will simply blaze a trail. But whatever season you’re in, whether it’s retired or overwhelmed, remember God’s history of using “worn-out” women. God’s great purpose for you might be yet to come.

Wishing a very happy 90th birthday to my grandmother, Martha Iley! This is a picture of her with my son, Coen, who is her 9th great-grandchild. There are quite a lot of children in our family–almost as many as Sarah’s.

Stop Looking in the Mirror