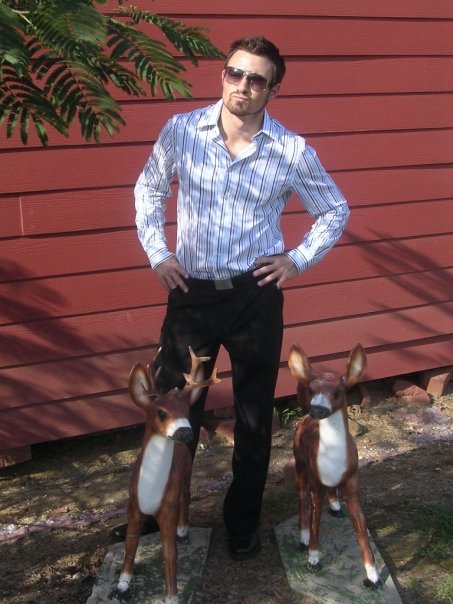 As most of you know by now, I am getting married this summer to a wonderful man named Ike, and it’s about time I introduce you to him. To the left you can see a picture of Ike with some fake lawn deer. That’s Ike.

Now Ike is probably going to kill me for putting this on the internet, but I’m about to make it up to him by also sharing another side of him with you (not the side that likes to pose like a GQ model with plastic woodland creatures).

While Ike indeed has a silly side, he is also very serious about Jesus.

Last night he preached a message out of 1 Corinthians 4 at my ministry’s worship service. In chapter 4, Paul responds to the criticism he receives about his ministry, reminding his critics that he only answers to God. Out of this text, Ike examined the dynamics of criticism and how it affects the Body of Christ.

Ike’s message was excellent. He did a great job of pinpointing the ways in which arrogant criticism can poison a church body. He also exposed the reality that most critics never get off their heinies and do the work themselves. We may criticize those who are preaching the Gospel, but in so criticizing, we fail to preach the Gospel ourselves. Therein lies the true problem.

That said, I have posted his message below. I think you will enjoy it, as well as be challenged by it. And for those of you who have yet to meet Ike but have been wanting to know more about him, I can’t think of a better introduction. He is a godly man, and he’s also a total stud. 🙂

(Just click on the above play button. The first minute or two is my voice as I introduced him. You can’t hear it very well so feel free to fast forward. You can also download the MP3 here: download.)