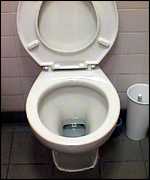 Right now I am in the throes of a massive head cold, so I’ve decided to depart from my usual quasi-intellectualism and write about something that’s a little bit more at my current functioning capacity. Bear with me.

(And my apologies to those of you who are offended at the use of the word “poop,” or if you’re like my friend Joe, who is utterly disgusted by girls who make any kind of reference to this bodily function.)

As we all know, most dating relationships go through a series of stages of comfortability. There’s the stage in which you will let your boyfriend see you wearing sweats, when you let him see you without make-up, when you let him kiss you before you’ve brushed your teeth, etc.

But perhaps one of the ultimate relationship benchmarks is the Smelly Bathroom stage. Prior to this stage, you will do whatever it takes to fool your significant other into thinking that you simply do not produce the Big Number 2. You will go across the street, find a bathroom in another part of the building, house, or apartment, or if you don’t have that option, you’ll turn on the bathroom fan and run some water. Or for those of us who are really ashamed, we’ll hold it…much to the dismay of our intestinal tract.

But eventually there comes a point at which you quit putting on the charade, and you just go for it. Sometimes this happens with your foreknowledge, other times you are so desperate that you have no choice and mother nature forces you.

But whatever the circumstances, you reach a point at which you are no longer ashamed in the way you used to be. You have now owned up to the reality that you do in fact poop, and amazingly your boyfriend is still attracted to you, so you have a new level of connectedness and acceptance that you didn’t have before.

What is truly ironic about this whole process is the shame and embarrassment that we associate with this bodily function, even though EVERYBODY does it. Why is it that we feel the need to pretend that we are the only human being in the history of time that doesn’t have to do this? Why aren’t we comfortable with the reality that it’s a normal part of life?

When you get right down to it, everyone poops. And not only that, but everyone’s poop pretty much looks exactly the same (unless you’ve had one of those cheesy burritos from Taco Bell…but let’s not make rules based upon exceptions). We all do it, so what’s the big deal?

Well I got to thinking about this, and I had a striking realization–we engage in the same game of pretend when it comes to sin. Just like the inevitability of an occasional poop, everybody sins. With the exception of Christ, there has never been a single person on earth who has lived a sinless life. Yet we carry on these charades, acting as if we don’t sin, and being ashamed and embarrassed that someone might find us out. In the same way that we’ll run across the street just to find a toilet, we’ll go to extreme measures to hide the sin in our lives, even from the people with whom we are closest.

And this secrecy keeps us in bondage. We are constantly trying to position our lives in such a way that will hide the unattractive parts. But that is no way to live, and it only contributes to a much larger trend in which ALL people think they’re the only ones.

So we need to start being honest about the fact that everyone sins. And just like poop, our sin pretty much looks the same. Scripture tells us that we have not endured any temptation that is uncommon to man (1 Cor. 10:13), so while you may secretly believe that you’re a particularly bad person, God would have to disagree. We are all equally fallen, and all in need of grace, so let’s start talking about it.

Once we create a community in which we can be open about our sin, we might just experience an effect that is similar to the “smelly bathroom” stage of a dating relationship–yes it’s gross, but you are still loved and accepted anyway. That’s a good place to be.

And thus concludes my head-cold inspired writing. I hope you enjoyed it. I will return to my regular standard of thinking and maturity in a few shorts days.