Last Week I Went to Charleston

Last week I went to Charleston.

I planned the trip months ago with my mom and cousins. It was going to be a fun, all girls get-away. We do it every summer, and Charleston is one of my favorite spots. It’s the city where Ike and I fell in love, and it’s the city where he proposed. I love Charleston and I go there once or twice a year, so I was excited to return. Back then, my only concern was the heat. 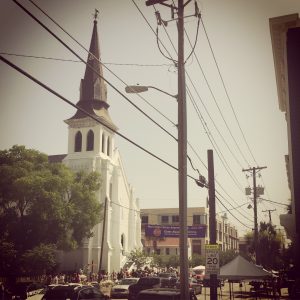 Everything changed on June 17. A white supremacist  walked into Charleston’s oldest African American church, Mother Emanuel AME, and massacred nine people. It was evil personified, and I knew my beloved city would never be the same.

Prior to the attack, our vacation plans had been typical Charleston fare–eat at delicious restaurants, tour the historic sites, shop. After the attack, we knew our plans would have to change.

We spent our first morning in Charleston at Emanuel AME. The experience was very emotional, and I’ve spent the last week processing it. I was surprised by some of my feelings, and I wasn’t sure how to share them with you. But I’ve decided to go with honesty.

When I rounded the corner and first set eyes on the church, a knot began to rise in my throat. As I walked closer, the knot turned into tears, and the tears grew into sobs. I clapped my hand over my mouth trying to hold it in. I didn’t want to make a scene, but the grief hit me like a brick. I could barely contain it.

Eventually I approached the front of the church, where a large crowd was gathered. People were leaving flowers, notes, and prayers. All I could do was weep. I was glad for the veil of my sunglasses, because I was embarrassed. Maybe that sounds like a strange response, but I didn’t know my place. Who was I, a white woman, to make a show of grief? Was that even appropriate? Or should I stand to the side in humble silence? A part of me wanted to run up to every black person there and apologize. Another part of me wanted to hug everyone in sight.

I felt the way any outsider feels looking in on a tragedy: at a bit of a loss. It’s hard to know what to say, or how to communicate love. Especially on a matter as complicated as race. Especially as a white person.

But my awkwardness also stemmed from this: I didn’t want my experience to be about catharsis. As a white person, it would be easy to go and pay my respects as a way to relieve my conscience. I could shed some tears, leave some flowers, hug some necks, and then pat myself on the back for being a sensitive white American. Not like those racist types. Oh no! I care. I grieve. I am a good person.

That would have been cathartic, but it also would have been empty. Because at the end of the day, that gesture is worthless. All it does is comfort the comforter. It doesn’t change a thing.

When Jesus landed and saw a large crowd, he had compassion on them and healed their sick. – Matt. 14:14

Jesus had compassion on them and touched their eyes. – Matt. 20:34

When Jesus landed and saw a large crowd, he had compassion on them, because they were like sheep without a shepherd. So he began teaching them many things. – Mark 6:34

“But while he was still a long way off, his father saw him and was filled with compassion for him; he ran to his son, threw his arms around him and kissed him.” – Luke 15:20, the Parable of the Prodigal Son

The word compassion literally means “suffer with.” Although this co-suffering can take the form of emotion–it is certainly right to grieve alongside the suffering–it also has a very literal sense to it. We are to take on the burden, to step into it and receive it. Just as Jesus took on ours.

When it comes to racism in America, that is going to look different for different people. For me, that means writing about racism and raising awareness. It’s a small thing, so I am ashamed to admit that it takes some faith. I have readers, friends, and even family members who disagree with what I write. Or, they simply don’t care. Race is not an easy sell with my white readers, but it matters so much more than the risk.

For me, compassion also means talking to my black friends about their experiences, and hearing what they have to say, even if it hurts. It means being open to change, and willing to repent.

There are many other ways to co-suffer with the suffering, so I hope you will consider what it looks like in your own life. Is your compassion just an emotion without feet in the real world? Or does your compassion spur you to action?

When Jesus carried his cross, most of the crowd simply watched him. Some mocked him, while others looked on with sorrow. Only one man, Simon, helped him to carry it. (Matt. 27:32)

The world will not be saved by sentimentality. The cross is evidence of that. The question we need to be asking is this: will we merely look on in sorrow, or will we pick up the cross and carry it ourselves? In a nation where people are STILL being gunned down for the color of their skin, this question is ever-pressing on we who follow Jesus.