Less is So Much More

The other day I was having lunch with one of my good friends and she asked me how I was doing. I smiled and told her, “I’m actually doing really well! In fact, this is probably the happiest I’ve ever been!” No sooner did those words escape my lips than my smile changed into a frown of concern as I exclaimed, “I hope it’s not because I’m married!”

I know I’m probably the first woman in the history of the world to utter that phrase. But the idea that getting married would suddenly impact my happiness so profoundly is kind of disturbing to me. If you’d read my blog for any amount of time, you know that idea goes against a lot of what I believe theologically. No person or event should satisfy us in the way that God does. If my quality of life is dramatically improved as a result of marriage, is that an indicator of some unseen idol in my life? Have I been deluding myself all along?

Now obviously it’s a good thing to be married. And this should be a happy time in my life. I should be living it up, as a number of my single friends have reminded me. But in all honesty as much as I do love being married, I don’t think that’s the ultimate source of my extreme happiness. The reason things have been so good lately is that right about the time I got married, I also quit almost everything I was involved with.

Ever since I was in high school I have been over-committed. I’ve been leading too many things for way too long, and I literally haven’t taken a season for myself in 10 years. I think it all culminated this past year when I was a campus minister leading two small groups in 2 different cities and planning a wedding. I was pouring myself out without allowing any time to fill myself up, and I hit a wall. If my life was a line graph, you would have seen a steady decline of spiritual output in 2008-2009, which ultimately ended in a crash. It’s like my spiritual life was mirroring the economy.

So I decided it was time to do some pruning. I quite my job, quit leading my small groups, quit discipling, quit everything. I started from square one. I made up my mind to have very few commitments, so I joined a small group, took on a less intense servant role at my church, and most importantly carved out a very strict Sabbath.

And let me tell you, it has been awesome. The last several years of my life have been defined by a kind of spiritual winter. It’s not that I couldn’t ever feel God, but I wasn’t really growing either. I felt dormant. This is the first time in years that I’ve begun to see the first little signs of spring popping up. I see touches of green everywhere.

It’s funny because this is so unlike me. I am over-committed girl. I tend to cram as much into my day as possible. In my mind, quantity equals effectiveness. The more I do the more I get done. The problem is that the quality was going down the tubes. It’s kind of like my husband’s insistence that he doesn’t need sleep before an exam. He studies all through the night because he thinks that the more time he spends studying, the more he’ll know for the test. In reality, studies show that a good night’s rest is actually more effective than cramming. If your brain is too tired to process the info, the info is worthless.

It’s the same for us spiritually. If our minds and bodies are too tired to process and live out the faith we profess, then we won’t be good for much at all. Plus, whenever I’m busy the first thing I usually cut out is my quiet time. Martin Luther once said that he had to spend 4 hours in prayer each morning BECAUSE he was so busy, and he was exactly right. The more I do, the MORE I need God to sustain me. It’s irrational that I would do the opposite.

So as someone who has crawled out from under the pile of over-commitment and seen the light of day, I have to tell you that it looks pretty good. I’m not as stressed, the quality of everything I do is better, and most importantly I’m recovering my intimacy with God. Don’t pressure yourself to do more than you should. Not only will the quality of your output suffer, but your witness will too. You’ll become tired, grumpy, and lacking in patience. The Gospel deserves better, so take care of yourself. It’s an investment in the Kingdom. 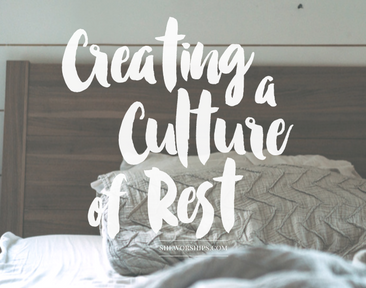 Creating a Culture of Rest