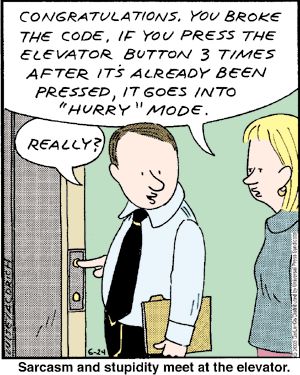 This year I’ve found myself talking to my students a LOT about sarcasm. And whenever the topic comes up, I usually mention the following uncomfortable verse from Proverbs 26:18-19:

Like a madman who throws firebrands, arrows, and death is the man who deceives his neighbor and says, “I was only joking!”

Upon citing this verse, I’m frequently met with a reaction of laughing disbelief, something along the lines of, “You can’t possibly be serious!” Most people can’t believe that verse is even in the Bible at all. Sounds a little extreme, right?

Well in typical Bible fashion, the author is right. And he was NOT speaking in hyperbole. This isn’t like the gym teacher in Mean Girls who told the students not to have sex or else they would die. The author isn’t exaggerating just to make a point.

On the contrary, this verse reveals the truly poisonous nature of sarcasm.

I don’t know about you, but I REALLY struggle with sarcasm. It’s one of the main conversational techniques I use to impress others and indicate that I can carry my own in witty conversations. In the past it’s been a significant aspect of my communication with others, and it continues to be.

We justify sarcasm by labeling it as a sign of comradery. We say we can be sarcastic with those to whom we feel closest. According to this logic, sarcasm isn’t a bad thing at all–it’s really an indication of intimacy.

But as the verse in Proverbs reveals, sarcasm isn’t really intimacy at all. It’s a false form of intimacy that masquerades as fellowship. Under the guise of “being comfortable enough to kid,” we replace open, honest conversation with an environment that’s inherently competitive. We encourage a spirit of one-upmanship, highlighting one another’s slip-ups and mistakes for the sake of entertainment and making ourselves look smart.

When sarcasm is allowed to dwell, our friendships are no longer safe places in which individuals can feel free to be vulnerable. That doesn’t mean that vulnerability is altogether absent, but it is less likely, especially when new people join the fold. We may think it’s harmless because all along we’re “only joking,” but in reality we’re short-circuiting any attempt at genuine Christian fellowship.

And that is what sarcasm kills. Sarcasm kills fellowship. And in a larger context, it also poisons ministries. Where sarcasm exists, you are all the more likely to find back-biting and gossip because underneath those jokes, hurt feelings reside. And where hurt feelings have been allowed to fester, they lash out at the first opportunity.

A community can sustain itself on sarcasm for years, but at the nearest sign of trouble those friendships will be tested. When hardship, miscommunication, or disagreement develop, the true mettle of a community will be revealed.

So pardon the pun, but don’t “kid” yourself into thinking that your sarcasm is innocent. The words of Proverbs 26 should dispel any notion of this sort. In reality, sarcasm kills intimacy and it destroys fellowship, so keep that in mind the next time one of your friends accidentally trips and falls on their face, or your spouse drops a glass on the floor. In that moment of vulnerability brought on by obvious imperfection, they need friendship, not an attack disguised as amicable joking.