Following the Bread Crumbs to Freedom

As a mom, there are some days when I am SO grateful for social media.

Like those days when I’m home alone for hours and hours, and by 3pm I still haven’t brushed my teeth or changed out of my pajamas and I barely feel like a human being.

On those days, social media feels like a God-send. I can send out a distress tweet to commiserate with other moms, or I can simply peruse Facebook as a reminder that yes, in fact, there is still a world out there where people are living normal adult lives, doing mature things like washing their hair and going to work and eating in restaurants.

For some reason Twitter sours me more often than Facebook, but no matter the source, I hate those negative feelings. I also hate the way I respond to them.

In addition to sulking about, I respond to those feelings by doing more. I feel the need to write more, to get my name out there, to build my “platform” (whatever that means), and to keep up with everyone around me.

It’s a spiral of awful.

In Galatians 5:1, Paul describes the freedom we have in Christ, and how fleeting it can be:

It is for freedom that Christ has set us free. Stand firm, then, and do not let yourselves be burdened again by a yoke of slavery.

What stands out to me about this verse is the notion that we can forfeit our freedom. Freedom is not a given; I don’t have it simply because I “prayed a prayer”.

Instead, freedom is something I must fight for. I must “stand firm.”

Otherwise, my soul will slip back into spiritual bondage like an old habit.

At the recent IF Gathering, Christine Caine articulated this concept when she made a distinction between deliverance and freedom. Recalling the story of the Israelites, she explained that many of us have settled for deliverance, but we are not truly free. Rather than walk in the freedom of Christ, we continue to dwell in captivities of our own making. As she put it, we’ve come out of Egypt, but Egypt has not come out of us.

How, then, do we find our way to freedom?

I’ve been thinking about this question a lot, and I realized that the first step is to identify the nature of my captivity. What exactly is keeping me in bondage?

Well I certainly have a clue. Those emotions I described above–the insecurity, the anger, the jealousy, the need to produce–together they form a trail of bread crumbs that points directly to my captivity, which is this:

An unhealthy relationship with social media.

As a result, my soul has suffered and my ministry focus has wandered. I’ve become me-centered, and human-centered.

In that emotional and spiritual muck, I find myself living delivered, but not truly free.

But as I said, identifying the source of my captivity is the first step to freedom. If social media is the problem, then the answer is clear–I need to cut it off. I need to fast.

As luck (or Providence!) would have it, the season of Lent begins two weeks from today. Over the years, I have used the season as a time to fast from things in my life that have become false idols.  It recalibrates my heart and soul, and it’s liberating.

So this Lent I plan to fast from all social media–Facebook, Twitter, Instagram, even blogging. I need a soul Sabbath, a time to pull away and focus on why I serve, and who I serve. For me, this is the way back to freedom.

That said, I want to invite you to join me in finding your own path to freedom. Your fast might look different than mine, but in the coming weeks I invite you to examine your own emotional bread crumbs. Those bread crumbs will lead you to the source of your bondage, which also means they’ll point you to the way out.

So, what stands between you and the freedom of Christ? What needs to be pruned? 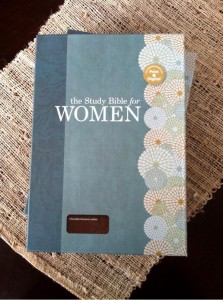 I promise I’m not trying to be gimmicky with a serious thing like Lent, but as an added incentive to think about your own Lenten fast, I’m doing a book giveaway! The book is a Bible so I don’t feel too bad about it, but if you leave a comment sharing about your own plans for Lent, I’ll enter your name into a drawing for this nifty new Women’s Study Bible. It’s nice and big and heavy with a brown leather cover (this picture is just the box that it comes in).

So, I invite you to reflect and to share. I hope you will take the time to investigate the areas of your soul that are delivered but not fully free, and commit to stepping out of captivity.

For it is for freedom that Christ set us free.