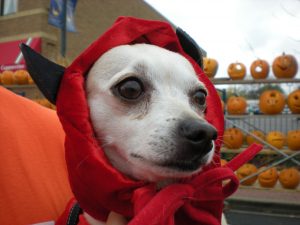 In honor of the holiday weekend I thought I would write a Halloween themed post. And I could think of no better way to kick it off than with a picture of my dog in her Halloween costume! We don’t normally dress her up, but the town where I live had a massive pumpkin festival in which we competed to break the world record for most carved pumpkins. The record was 32,000 and we only made it to 26,000, but we still had a lot of fun and Ellie showed her team spirit with her costume.

(This particular picture makes me laugh because I think she looks like an evil dictator.)

Keeping with the Halloween theme, I’ve been thinking a lot lately about a popular show on the Travel Channel. It’s called “Ghost Adventures,” but it’s not your average ghost show.

The program is shot in a documentary style by 3 guys who spend the night in reportedly haunted places and report their findings. The show itself is not designed to be scary–no spooky music or raspy voiced narrators or up-close camera shots of them whispering, “I’m so scared!” It’s more of a scientific approach as the leader of the group aims to disprove supernatural skeptics. He explains during the opening segment of each show that he once had his own encounter with a ghost, and has since been driven by the desire to prove their existence in the world.

This show is fascinating to me because I think these men are sincere, and I also think they have no idea just what they’re messing with. In fact, one of the men admitted that his marriage eventually fell apart after he couldn’t stop having nightmares about a specific haunted location. As I’ve watched the show, it has given me a lot to think about in terms of spiritual warfare.

I’m also not the only one who finds this show interesting. It has grown in popularity and the Travel Channel shows it all the time. However, Ghost Adventures’ rise in popularity is not necessarily a unique phenomenon– it belongs to a long line of “haunted” entertainment (haunted houses, ghost stories, ghost tours, etc.) that consumers just can’t seem to get enough of.

The question is why? Why are people so captivated by stories about ghosts? And more strangely, why do people enjoy being scared by them? In an age when the supernatural realm is so publicly frowned upon and largely absent from mainstream media, why do these shows maintain such unchallenged acceptance?

Well you might be surprised to know that this is a question theologians have studied. In particular, theologian Rudolph Otto and the more familiar C.S. Lewis examined what this desire to be scared by ghosts tells us. According to both Otto and Lewis, the feeling of fear, dread, and awe that we experience when hearing a scary ghost story or watching a show about ghosts is the result of an encounter with the “numinous.” In his book The Problem of Pain, Lewis describes the numinous the following way:

“In all developed religion we find three strands or elements, and in Christianity one more. The first of these is what Professor Otto calls the experience of the Numinous. Those who have not met this term may be introduced to it by the following device. Suppose you were told there was a tiger in the next room: you would know that you were in danger and would probably feel fear. But if you were told ‘There is a ghost in the next room’, and believed it, you would feel, indeed, what is often called fear, but a different kind. It would not be based on the knowledge of danger, for no one is primarily afraid of what a ghost may do to him, but of mere fact that it is a ghost. It is ‘uncanny’ rather than dangerous, and the special kind of fear it excites may be called Dread. With the Uncanny one has reached the fringes of the Numinous. Now suppose that you were told simply ‘There is a mighty spirit in the room’, and believed it. Your feelings would then be even less like the mere fear of danger: but the disturbance would be profound. You would feel wonder and a certain shrinking–a sense of inadequacy to cope with such a visitant and of prostration before it–an emotion which might be express in Shakespeare’s words ‘Under it my genius is rebuked’. This Feeling may be described as awe, and the object which excites is as the Numinous.”

The above description may bring to mind the scene in Isaiah 6:5 when Isaiah stands before the holy God, trembling and confessing, “Woe to me! I am ruined! For I am a man of unclean lips.” That fear, awe and dread is what a human experiences in the presence of something holy, other, and completely transcendent. It is both a wonderful and frightful experience, and as Lewis explains, we encounter the fringes of that same sensation when interacting with lesser elements of the spiritual realm.

The reason people like to experience this particular kind of fear is that, without realizing it, they are glimpsing an echo of what it’s like to encounter God. Whenever we interact with the metaphysical, whether it is through worship, ghost stories, or even a truly magnificent work of art, it causes our souls to shudder in a way that is both frightening and marvelous. That is why humans seek after that feeling, not knowing that it is ultimately found in God.

Of course, the quest for the numinous can be a dangerous one, as I believe the men on Ghost Adventures have experienced first-hand. If you fixate on the wrong source, you will not only miss God altogether but instead fall into idolatry or a preoccupation with a darker, perilous realm. Even so, I see the popularity of shows like Ghost Adventures as a clear indicator that our country is spiritually thirsty. While science has made it unpopular to explore the supernatural in a legitimate, acceptable way, shows like Ghost Adventures offer a back door approach to asking questions about the supernatural realm in a less politically charged manner. They also provide us with a great way to start conversations that ultimately lead to the one true source of awe and wonder, a holy God.