What IF…God is Using Women to Do Something New? 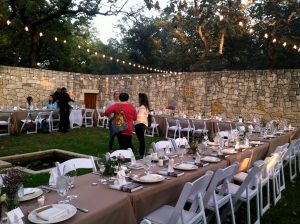 Two weeks ago, God took me on a crazy adventure.

In faith, I paid for a ticket, got on a plane to Austin, and met up with a group of Christian writers and leaders like myself, almost none of whom I knew, for a purpose that was not altogether clear.

As weird as it sounds, I didn’t know why I was going. I just knew God wanted me there.

In the days that followed, I spent time with a diverse group of women and heard from the soul of Jennie Allen, a writer and speaker with a heart for Jesus and women. My path first crossed with Jennie’s a couple years ago, but this was the first time I had met her in person. I knew God had placed a similar calling on our lives, and I thought God might be speaking to her.

My hunch was right.

Jennie has a vision for reaching women, and the vision is big. I mean BIG, y’all. That is part of the reason she gathered us together. Not to assemble some sort of women’s ministry A-Team, or to create an exclusive group. Instead, we were there to deal with some junk.

You see, there were walls between us women. All of us were evangelical, and we all loved Jesus, but we all came from different “tribes” within evangelicalism. There were barriers between us–some spoken, some unspoken; some big, some small–and we knew where everyone stood.

That tribe mentality is so entrenched in the church right now. As a writer, I am confronted with it a lot. It’s really frustrating, it’s really sad, and you know what else? It’s a ridiculous WASTE.

I can just hear the Enemy cackling with glee as he watches us squander precious time debating the finer points of theology, or judging one another’s parenting, or slandering a person we disagree with, all in the name of Jesus. He delights to watch us draw long, deep lines in the sand between one another, dividing the church, labeling one another, fracturing Christ’s Bride, instead of looking out there, out at the world where people are perishing, where people need the gospel, where people need Jesus.

If we want to reach women, like really seriously reach women, then we need to deal with those walls. They need to come down. We need to call a truce, and remember what we have in common. We need to stop fighting each other and instead link arms, together for the cause of Christ.

That is what we did in Austin. During those three days together, the spirit of God swept across us like a rushing wind. His presence rained down in different ways, depending on each woman there. For some, He brought healing. For others, He brought reconciliation. To some He gave vision, and to others He gave clarity.

For me, He simply spoke.

In a lot of ways, my time in Austin was hard. I’m an introvert by nature, and I didn’t know almost anyone there. Imagine standing in a Middle School cafeteria staring out at a sea of tables, trying to choose where to sit. Then imagine that each table is full of people who are more influential than you and intimidate you. That was how I felt for three days, and I was wrecked by the end of it.

But even in spite of my own human frailty–perhaps even through it–God spoke ever so clearly. And this is what He said:

Behold, I am doing a new thing;
now it springs forth, do you not perceive it?
I will make a way in the wilderness
and rivers in the desert.

Now I’ll be honest: I don’t know what this new thing looks like. Jennie has been honest about the fact that she doesn’t know either. But y’all, I know this for sure–God has got His hand on that woman, and the whole IF leadership team. I SAW it with my own eyes. I haven’t seen anything like it in a long time. A LONG time, friends. It brings tears to my eyes just remembering it. In fact, I basically cried for three days straight while I was there, because I felt His presence SO powerfully.

He is orchestrating something magnificent, something new, and during those three days I watched as God broke down walls and knit together the hearts of women by the power of Jesus Christ. He reminded us why we live and breathe and have our being, that it is ALL for Jesus. That to live is Christ and to die is gain, and if we aren’t giving every fiber of our souls to get out there and reach the world, then WHAT ARE WE DOING?

The name of this movement, IF, is appropriate, because we don’t know exactly where God is headed. But I know that His hand is in this, and I know I don’t want to miss out on the extraordinary new thing He is about to do.

As the vision continues to take form, keep visiting the IF website for forthcoming details, and check out this video from Jennie herself:

As Jennie mentioned, this first gathering is all about seeking God in prayer. If you can’t join us in Austin I hope you will consider gathering together a local group wherever you are. I also hope you will consider donating to the fundraiser for this event, since Jennie and the IF Team have taken a major step of faith by not requiring a set ticket price. You can donate here.

Friends, I am excited. I am also scared. I am overwhelmed. I am hopeful. I wish God would give us the whole heaping vision all at once, but He has not. He has given us just enough information to know that this is of Him, and not much more.

He has given us just enough information to take one step forward, and that is what I am doing.

That week in Austin, I saw God tear down walls and unite a group of women around the cause of Christ. I think, I hope, it was a foretaste of what He wants to do on a much larger scale. I think He is doing a new thing, and I cannot wait to be a part of it.