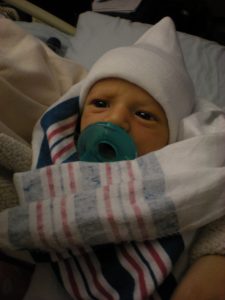 Well quite a lot has happened since I was last on here! To all of you who wrote, called, tweeted, etc. to encourage me in the days after my due date, THANK YOU! God encouraged my heart tremendously with each word of support and prayer lifted up. Your love was such a gift to me!

To catch you up on what has happened since, I began having pretty intense contractions early Sunday morning, which was a week and two days past my due date. We skipped church thinking the contractions might go somewhere, but they never increased in intensity or consistency. That is, until late Sunday afternoon when they were coming 7-10 minutes apart.

Because we live a long distance from the hospital we had planned to spend the early part of labor at the home of a friend who lived close to the hospital. On Sunday night we drove to their place hoping we might check into the hospital some time later that night.

By about 1am Monday morning my contractions were coming an average of 6 minutes apart. This continued until 4am when I was so exhausted that I passed out and slept for awhile. That’s when the contractions slowed down and we wondered if I had been experiencing false labor.

Discouraged, we called the doctor and met with him. Since I was over a week past my due date he sent us to labor and delivery to monitor my contractions and determine if I was truly in labor. During that time, the baby’s heart rate dropped temporarily and the doctors strongly encouraged us to stay.

This is the point when the story got crazy…or at least it felt that way to me.

Ike and I had been unsure about whether or not to stay at the hospital for that early part of labor. We had the choice to experience a LONG labor at the hospital, or to spend part of my labor in a more comfortable place until we needed to be in the hospital. We prayed about it and we decided to stay at the hospital. And it’s a good thing we did. Soon after, the doctors took my blood pressure and realized it was extremely elevated. After more tests, they realized I had developed pre-eclampsia.

The symptoms for the pre-eclampsia came on FAST, which is pretty scary. Plus, the baby’s heart rate was not responding well to contractions, so we realized that we needed to deliver somewhat soon. The doctors treated me for my pre-eclampsia (which is actually a rather intense and miserable treatment) and we watched the baby’s heart rate as we tried to decide whether a cesarean was necessary.

Around 3am on Tuesday morning we were pretty sure that a C-section was in the works because the baby was becoming more distressed and I wasn’t nearly dilated enough to deliver. I did not want a C-section at all, so Ike and I prayed over the situation and waited to see what would happen.

Around 4am, out of nowhere, I suddenly dilated the full 10 cm and the baby’s heart rate was strong. The doctors and nurses all flooded the room, told me to push, and about 20 minutes later we had our little boy. Isaac Xavier.

A lot of my memory from those days is pretty hazy. Although the labor was long, the changes were often fast and urgent. Ike will probably have to recount a lot more of it to me later. What I DO remember is a sense that God had gone before us in the process. We had covered the labor in prayer for the last 9 months, secretly hoping we would have the best and easiest labor ever! Instead, those prayers translated into good decisions during a stressful time. In the last few days, we have made decisions with only part of the information (ie. we didn’t know I was pre-eclamptic) and then thanked God that he led us the way that He did. As crazy as the last few days have been, God clearly made straight our paths.

Now we are enjoying time with our precious boy, named after the two most important men in my life–my husband and my dad. Isaac is the cutest little kid and we have loved getting to know him. I have marveled at the ways my heart has grown in love for this little person that I just met.

All of that to say, thank you to everyone who prayed for us, prayed for Isaac, or simply encouraged us with kind words of support. This experience would me miraculous enough on its own, but I have also been overwhelmed by the deep connectedness of the Body of Christ when I really needed it. I am so grateful for my son, for the Body of Christ, and the Savior who laid himself down for both.

Now I’m off to go spend more time with my newborn treasure. Thanks again to you all!