While I’m on my honeymoon, my friend David Goodman will be posting his thoughts about the relationship between science and theology. Now before you tune out because this sounds nerdy/boring, you should know that my conversations with him have surrounded the issue of birth control, and that’s why I’ve asked him to post. He is going into his 4th year of medical school at UNC-Chapel Hill and has wrestled with this topic a lot as he considers the ethics of prescribing birth control, and how it coincides with his pro-life beliefs. He is a godly man, as well as being super sharp, so I thought you all would benefit from his insights! 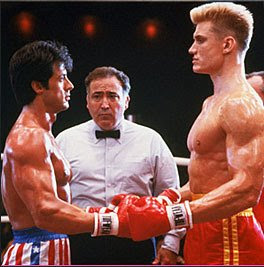 Hello blog world.  She Worships has been invaded by a dude, most notably illustrated in the picture from Rocky IV situated to the left.  No, this is not a shameless plug to get Sly Stallone on ‘s blog.  This was the image that came to my mind when  asked me to write about the relationship between science and theology.  You see in the film Rocky is a fiery, passionate boxer with a mission to prove going up against the formidable Russian Ivan Drago, the machine-man that represents the overwhelming strength of the Cold War USSR who crushes opponents with almost superhuman force.  At one point in the fight Rocky is dancing around the ring, taking punches from the Russian and taunting him saying “You ain’t so bad!” in an effort to tire him out.

Do you ever feel that way listening to reports from “scientists” that seem to shake the foundation of everything you believe in?  Does it ever seem that despite your passion and fiery spirit you find yourself staring a giant of opposition in the face?  Like said, we have been involved in an ongoing conversation with each other, our friends, and pastors about birth control and other touchy ethical issues.  What I want to address is a question posed to me after I spent hours scouring medical journals and textbooks for the exact pathophysiology of birth control and fertilization.  She asked, “What is the point where science trumps theology, and how do you know just when to let Scripture speak for itself?”  The real question is how much weight do particular scientific facts have to sway your theological beliefs one way or the other?  Regarding this question I have a few introductory points:

1. Everyone worships something. A misconception in the eyes of many people who would identify themselves as scientific is that they believe they don’t make faith decisions but instead trust fact. However, if you listen closely to the discussion of scientific individuals, you can hear how they have aligned themselves with a particular set of beliefs; several of which are based on faith, and have a common subculture analogous to the Christian subculture.  We see the ultimate progression of this illustrated in a very appropriate episode of Southpark (no I am not endorsing Southpark, no I don’t watch it, no I don’t think you should) where Science becomes the new God in the future.  People go to the First Church of Science, they take Science’s name in vain when they cuss, they pray to Science as if the term “Science” had been deified to take the place of God in our future society.  In many ways this is happening today, but it is just not quite so conspicuous.

One topic common in some Christian teaching circles these days is the idea of idolatry.  Idolatry in the sense that we trust something else besides the truth of the Gospel to meet our needs or that we find our ultimate fulfillment in something apart from Christ.  Unless our hearts are focused solely on Christ we will use something else as our “functional Savior”. For many this can be your status, marriage, career, ministry, etc, but for our purposes here it is science or theology. Mark Driscoll points out that in order to make anything your functional Savior you have to demonize everything else.  Postmodern scientists and philosophers demonize religion because for them science is the new idol, the new faith, the new religion.  The problem is that many Christians, without even realizing it, often make their theological worldview their idol and demonize other views in order to irrationally protect theirs’.

I believe that God created the world with miraculous order and a specific purpose.  In order to be most God-glorifying we have to learn how to appreciate science without stepping into defense mode every time some new objection is presented.  As Christians we stand on the truth that the fact that God made the universe with order is precisely why science can exist and help to identify the guiding principles of that order.

2. Everyone begins with assumptions.  It is an undeniable reality that no one can be removed from their underlying worldview, and we all are biased in some direction.  When I studied engineering at Clemson (woo hoo!) every problem began with listing the assumptions that we had to make in order to simplify and solve the problem.  This is also true of science.  I can’t tell you how many lectures, podcasts, and interviews I have listened to where scientists purposefully stated that they believed the supernatural was not true and immediately assumed it could not be the answer.

Think about this very clearly whenever you engage anyone in conversation.  Ask yourself “What assumptions are they working off of?” and “What assumptions am I bringing into this discussion?”  I was going to go into a few lengthy examples, but I think that simply being aware of this reality is sufficient.

Have you ever made the statement “A loving God would never _______.”? This is a perfect example about how you paint God with your assumptions for what he should be like.  Think about this when you discuss things with people you disagree with.  Often you will find that you can have a much more civil and productive discussion if you spend time on the front end talking about what assumptions the other person is making and clearly defining terms.

3. The Bible was never meant to be a scientific textbook. The Bible exists to provide an everlasting record of the story of God in his efforts to redeem humanity and to display the majesty of his grace, for his glory and our joy.  The Bible exists to illustrate Christ as the centerpiece of redemption.  Take Genesis and the origin of Creation for example.  What God is doing in Genesis is telling the story of how the nation of came into existence.  It is describing the process by which mankind was created and fell, and it begins to tell the story of how God chose a people for himself to be the vessel of his truth until the fullness of time arrived when Jesus would come on the scene.  Somehow this all got messed up around the time that Christians became very defensive against the Scientific Revolution.

Do I believe in a God that created the world? Yes.  Do I know exactly how that happened? No.  Look at our formation as human beings as an example.  The Bible says that God made man from the dust of the earth.  Now, are you made of dirt? No.  You know what you are made of? Carbon, hydrogen, oxygen, nitrogen, iron, etc.  The same fundamental building blocks that inhabit other organic materials and are found in dirt.  The Bible should say, “God formed man by causing to exist subatomic particles that interact with one another in order to create defined elements that function as the building blocks for the precise physiological mechanisms consistent with life.”  I’m glad Moses just wrote that we were made from dirt.

What I am trying to say is that we simply cannot make the Bible say something it was never intended to speak to.  The Bible is sufficient for describing the story of how one is to be saved and it does it with impeccable precision.

I hope these were a few helpful points for where to start to wrestle with the interplay between science and theology.  I am going to post some more specific thoughts later this week, but hopefully this will get you thinking.