About a month and a half ago I posted an entry called Taking Off Your Makeup, and this past week a version of it was re-posted on Christianity Today’s blog for women, Her.meneutics. Surprisingly, Christianity Today has a wider readership than my personal blog (please note sarcasm) and I received a lot of wonderful feedback as a result! For example, this week I will be interviewed on the True Sisterhood Podcast as a follow-up to my article (I’ll post more info on that later this week). My preparation for that interview leads me to the topic of today’s post. 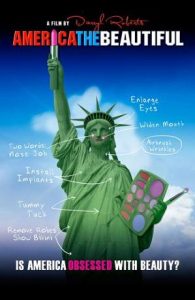 As I reflected on the topic of the interview I decided to watch a documentary called America the Beautiful. I highly recommend this film if you have not seen it, although I should warn you that it does contain harsh language and sexual images. It is not a film for young girls. I do, however, want to watch it again with my husband so that we can talk through it together. The overall aim of the documentary is to expose the methods by which our culture objectifies women in ways that are emotionally and physically harmful. One of the chief questions raised by the film, in my opinion, concerns the true nature of beauty. To what extent is beauty culturally defined? And given that extent, how much are we really in control of it? We might claim that we enjoy makeup and fashion in a healthy way, but there’s a blurry line between personal desire and culturally imposed standards.

The film raises so many different issues that I can’t possibly discuss them all here, but there was one moment that really stood out to me. Near the end of the documentary, the filmmaker interviewed a married couple who had lost a daughter to bulimia. As they reflected on the steps that led to her eating disorder, the mother recalled, “I would have never complained about the way I look in front of my daughter had I known she was struggling with her own self-image. When you think about it, most young girls grow up believing their moms are beautiful. But when we complain about the way we look, we reshape their notions of beauty and pass on our insecurities to them since they probably have the same body as us.”

This statement hit me square between the eyes. First of all, it resonated with my own childhood. When I was a little girl, I thought my mom was the most beautiful women in the whole world. In fact, I distinctly remember thinking how lucky I was to have such a pretty mom, and feeling sorry for other kids whose moms weren’t as pretty as mine! I can only assume my children will have similar sentiments.

Given that assumption, I have spent the last 20 years instilling some dangerous habits in myself. I complain about my body a LOT to my husband. There are certain aspects of myself with which I am never satisfied. But never had I considered that I could pass those insecurities on to my children.

In the Old Testament we are reminded of the power of a person’s legacy. Exodus 20:5, 34:7, Numbers 14:18 and Deuteronomy 5:9 all warn about children being punished for the sins of their parents. Fortunately, Christ has received the punishment for our sins so we no longer live in fear of those passages. Even so, there is an element of them that nevertheless stands true. Our sins impact those around us. Especially those who look up to us.

Whether you are a mom or a mentor, your personal insecurities and vanities can have consequences for the women around you. Whether it is your daughter or a young woman in college who looks to you as an example of godliness, your actions speak louder than words. I am greatly humbled by that reality. My weaknesses and insecurities are great, and I tremble to think of the example I set when younger women witness their ugliness.

All of that to say, the fight against insecurity and poor body image is not simply about ourselves. It is about the women around us as well. When we stand before God we will not only have to account for how we treated the body He gave us, but we will also have to account for the ways in which we were a stumbling block to others. From this perspective, loving ourselves is intimately connected to loving others.

So as I close, I want to end with one final word to my readers. Every week I get on this blog and I write about the things that God is teaching me. However, I do not write as an expert but as a woman in process. Most of the time I am preaching to myself, praying for the mercy to live out the things I know to be true. My life is not an example of perfection but of redemption. I admit there are and will continue to be inconsistencies between what I teach and how I live. I confess that and I repent. I also pray for the grace to lessen that gap. Please know that my struggles are just like yours, and I apologize if I ever feed into your insecurities, rather than point you to the One who can lift you out of them. I am just a spiritual pauper pointing other women to the One who gives me food. Christ alone is our all in all, and I pray that my personal inadequacies never distract you from him.